You might want to start with a little history and look at Designing for a Theme: Innovation Part 1.

With the topic “Fiber Artists Look at Innovation and Civic Action”, I personally decided to narrow down possibilities by choosing to represent innovation.  Since I’ve always enjoyed science, I started with looking at scientific journals and find out what some of the recent innovations have been that are expected to revolutionize areas of our lives.  This is where I found out about Graphene.

Graphene, a form of carbon only one atom thick and in a hexagonal cellular structure, is both the thinnest and strongest substance now known to man.  Scientists believe it will revolutionize technology from computer and mobile displays, medical devices, aerospace, desalination plants, electronics and countless ways which we cannot yet predict.  Since I’m a technology fan and my husband’s business is in aerospace, this seemed like a good place to start.  If you want to see a really cool futuristic video, check out this short YouTube “Future Applications of Graphene.”

So now I had a topic to try to represent to go along with the theme… but what could I do with it?  I decided I wanted to represent both the uniqueness of the material (thin, lightweight, hexagonal cellular structure) as well as some of the possible applications of the technology.

Another little aspect that I had to keep in mind was the unusual gallery space that this piece would (hopefully) be hanging in.  The walls were mostly all a deep dark forest green (with a hint of teal) and a couple that were a bright spring green.  Not exactly easy to hang anything on, but ok if you’re specifically designing for the backdrop color.

My idea was to have a thin sheer layer cut in a hexagonal pattern that would fiat above the quilt, which would be surfaced designed to tell more of the story. I started the quilted layer with white Pima cotton. I bought some plasticized wire garden fencing that had hexagons as its design, and started with placing it on top of the white fabric and spritzed jacquard Textile Paint through it. This created a resist, with a painted background (in blues and greens) with a shadowy faint white hexagonal grid.

I then created several black and white images from photos (using Photoshop) of things that will have future applications using graphene. These included a commercial airplane, computer circuit boards, a smartphone, and a computer touchscreen. I then turned these images into silkscreens using a thermofax machine. I layered these different images around on the background, using Versatex print ink.  I added some hand painting and when the paints were all dry, I finished the back/quilt with a diamond grid pattern for the quilting, as well as freemotion elements around each of the special elements.

Now it was time to figure out how to represent the one-atom thick sheets of this hexagonal carbon molecule. I knew I wanted to have it be somewhat sheer (and black, since it is carbon, after all.) I thought that using a black organza might get the effect I wanted, so I bought some of each silk, rayon, nylon and polyester organza to test. I had a couple of different ideas on how to cut out a grid that wouldn’t ravel and could hold up, yet not be too terribly difficult or end up too uneven.

The most consistent method and material turned out to be painting the nylon organza with matte medium, drying it, and cutting out the interior hexagons with small, sharp scissors. I’d been a bit surprised by this, thinking that a hot knife might cut and melt a synthetics edges at the same time, but it proved to be more difficult and harder to be exact than using my small Kai scissors.  Also, I tried treating with different products with varying degrees of success.  Some items made the organza too stiff (I wanted it still to be able to move in a breeze, to demonstrate the thinness of the graphene); others, like Fray Check, left a shiny plastic-like coating.

You can imagine the time it took me to cut out each of the little hexagons on the finished piece!  The next step was to figure out how to affix the top layer so it would hang out separately from the quilted back piece.  This turned out to be quite tricky.  After many trials and errors, I was able to get a decent effect using some heavy-duty grommets, 1/8″ copper piping, copper wire, and beads. 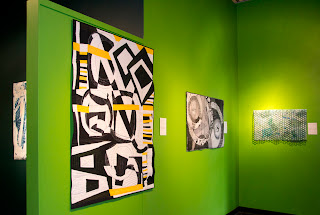 Thankfully, my efforts were rewarded by the jury and my piece was accepted into the show!  Here is the final piece, hanging at the Seattle Center Next 50 Exhibition!  I particularly like how the hanging grid creates such interesting shadows with the gallery lighting.  The only disappointment to me was that the show chair who mapped out where each piece was to go, choose to put my piece on one of the couple spring green walls, after I’d designed it to go on the dark green ones!  Well, you can’t control everything! 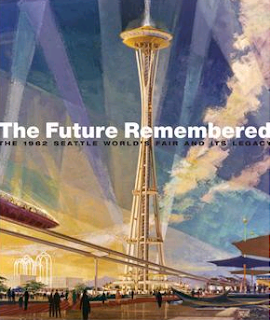 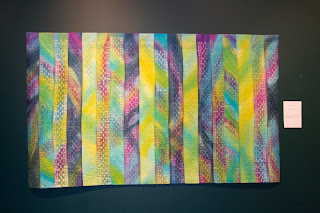 Do you shudder with fear or turn away with disdain when you see a show that has a theme?  It seems that many calls to artists request the artwork to meet an aspect of a theme, and some jurors are stricter than others about how closely a piece meets that criteria or not.

As the Co-chair for Exhibitions for the Contemporary QuiltArt Association, I’ve seen both jurors who would drop a piece for not seeming to have anything to do with a theme, and others who were open to a very broad interpretation (such as the title had a word that related to the theme, but there was no other discernible connection.) 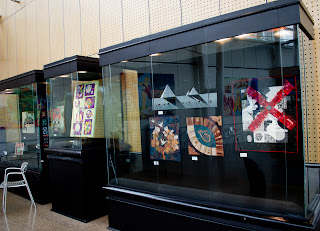 Being more of a representational artist, working with a theme usually works well for me.  I like having a launching pad for my ideas.  For instance, at one show at the SeaTac international airport, my quilt “Moulin Rouge Deux” was displayed, along with other quilts with international elements.  You can clearly see the pyramids in the other quilt alongside mine.

Currently, SeaTac has another exhibit from CQA, this one with the name and theme of “Journeys.”  In this show, we had some fabulous entries which took many different interpretations of the theme.  I have two additional pieces in this show.  Here are some photos from this exhibit: 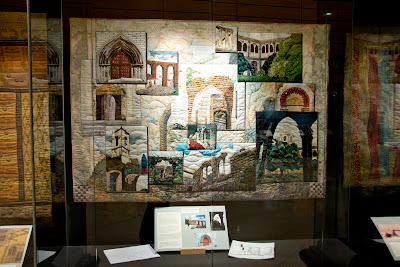 But what about when the theme is more difficult or restrictive?  I’ll go into that more tomorrow.  Pleasant dreams…yet another type of journey! 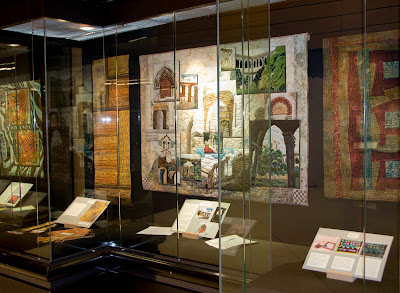 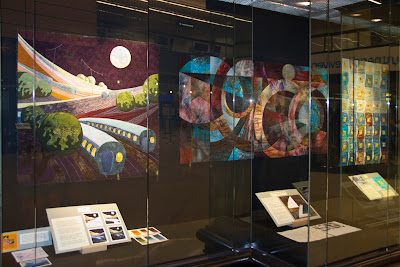