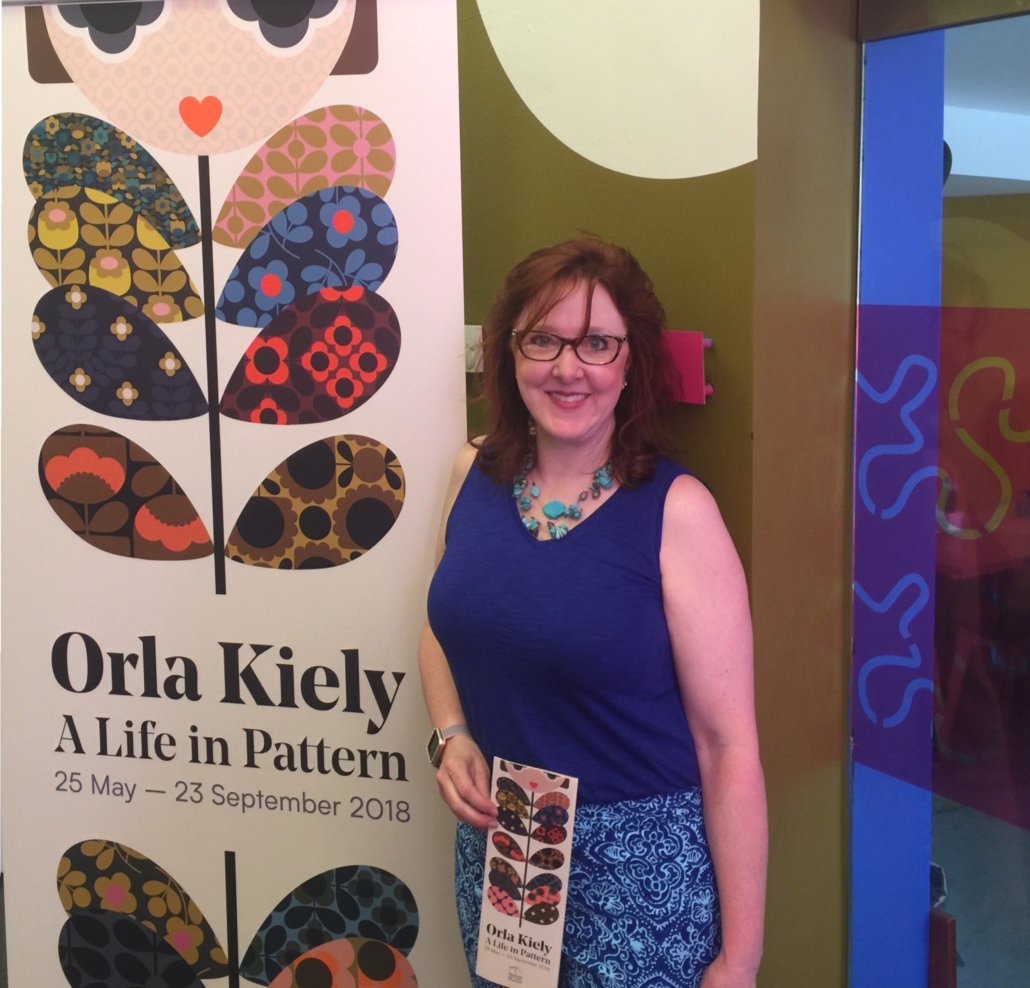 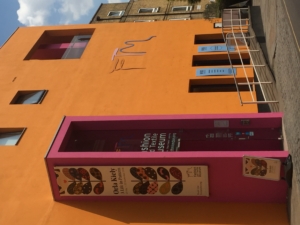 The last time I visited London, I found this wonderful little gem of a museum in the Southwark neighborhood.  This visit, they are featuring the work of Orla Kiely, one of Ireland and the UK’s most famous fashion designers, a perfect blend after just completing my trip to Ireland!

Orla Kiely studied textile design in Dublin in the early 1980’s and received her MA from the Royal College of Art in 1992. Having grown up in Ireland in the 60’s and 70’s, Orla’s design are influenced by the styles, colors and patterns of that era.

Nature inspires many of Kiely’s repeating patterns.  Her “Stem” pattern has become an iconic design, catapulting Kiely into International design success in 2000. 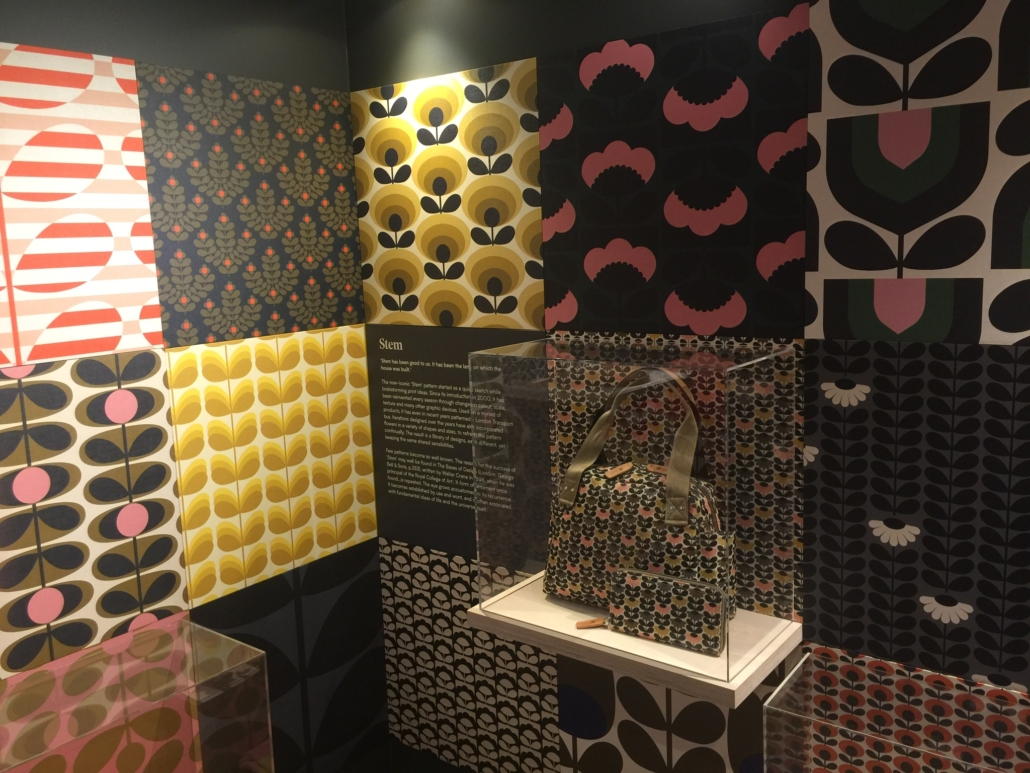 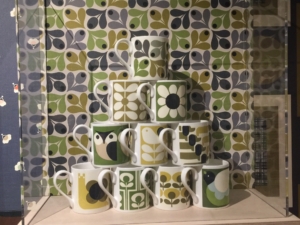 Her designs are based in rhythmic and repetitive pattern, now popular in accessories, handbags, wallpaper, and home decor, as well as her seasonal fashion collections. 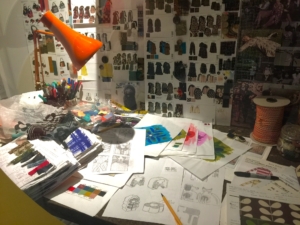 From the desk of Orla Kiely

Changes of scale, coordinating colors (often in a 1970’s palette, including avocado green, harvest gold, orange and chocolate brown), and whimsical, near-abstract depictions of animals are all common elements that make Orla’s designs unique and distinguishable.  The exhibition includes over 150 patterns and products and is well worth attending! 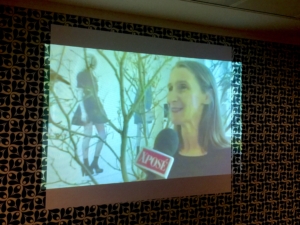 Filmed videos of Orla describing her inspirations, creative process, and collections, as well as footage of her fashion collection engage the audience in a multi media experience. 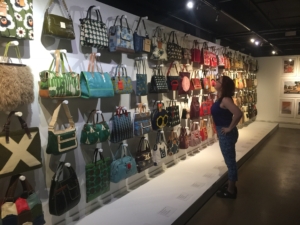 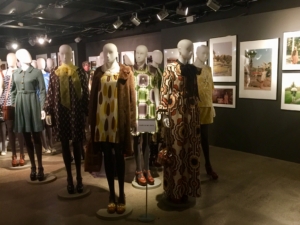 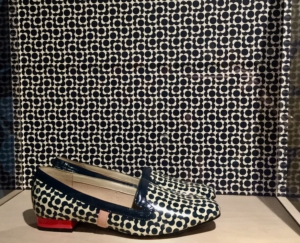 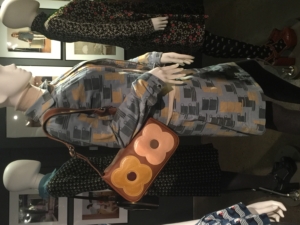 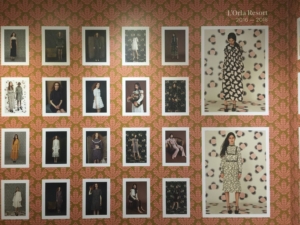 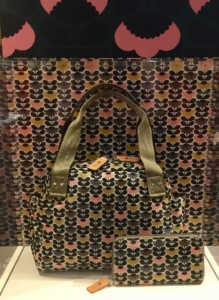 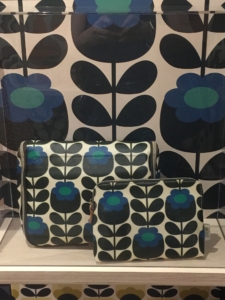 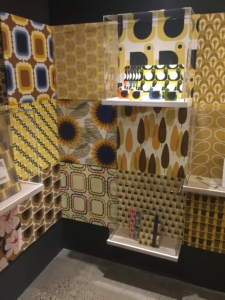 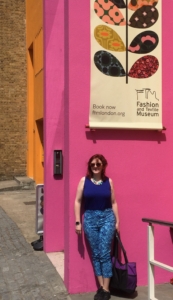 While I’m no expert on couture fashion, the pieces displayed at the National Museum of Ireland- Decorative Arts’s Special exhibition of Ib Jorgensen’s fashion were clearly a cut above the ordinary. Born in Denmark, Jorgensen immigrated with his family to Ireland in 1950. He attended Dublin’s Grafton Academy of Dress Designing and first garnered attention when he won the Academy Cup is his graduating year fashion show in the tailored suits and coats division. 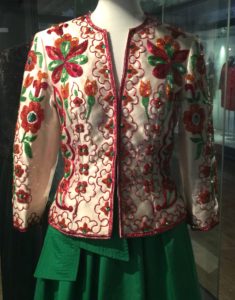 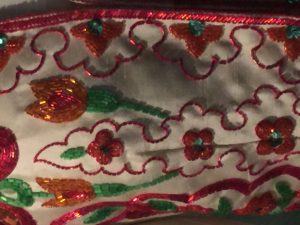 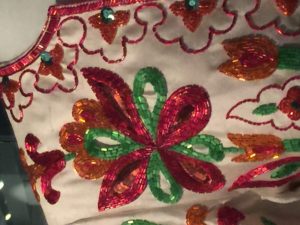 Jorgensen’s work caught the eye of fashion hours, Nicolas O’Dwyer, who hired him as a designer and pattern cutter at only 20 years old.  He was strongly influenced by the high standards of quality demanded by the workforce dervived from an old Jewish tailoring business. 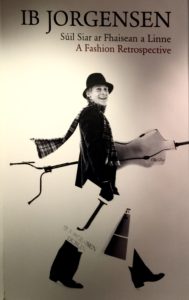 Ib Jorgensen on the exhibition poster at the National Museum of Ireland- Decorative Arts, Dublin

The exhibition looks back at Ib’s long career, displaying a selection of some forty garments including day, cocktail and evening wear from across three and a half decades, supplemented with original fashion photography and illustrations. His first wife Patricia, a textile designer, created designs for extravagant hand beading, appliqué and embroidery, and these techniques were frequently used to great effect on Ib’s evening wear. 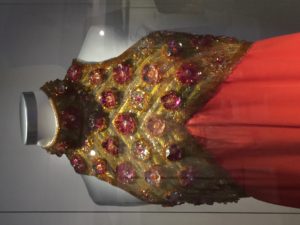 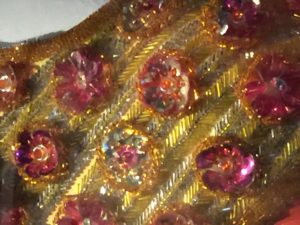 For more information on this exhibition, go to the museum’s website at:

We headed over to the one National Museum of Ireland- Decorative Arts & History location after lunch. I’m impressed that the museums are Free!  I think this egalitarian concept prevails throughout much of current Irish society.

The preservation of clothing, however, is largely restricted to the upper classes, due to the poorer people wearing their clothes until they were worn out. In the 18th C. Only the wealthy could afford to wear luxurious dress, but by the late 19th C., prosperous people in towns and villages across all of Ireland could dress fashionably. 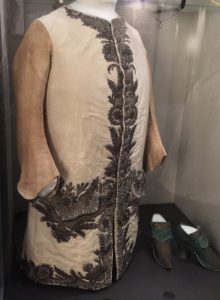 Silk waistcoat embroidered with silver thread in Ireland about 1760.

Having precious metal embroidery on your clothing did come with some risk. ‘Friends’ or staff might cut off threads to steal the expensive metal! 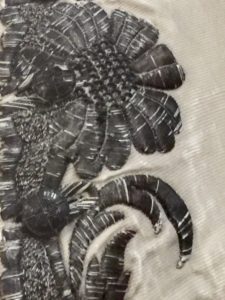 Detail of silver embroidery – silver thread darkens over time. In the 17th C., they would sprinkle hot breadcrumbs over the silver and rub with linen to remove the tarnish.

Lace has been an important industry in Ireland. Many families survived hard times by making lace. There are numerous distinct styles (several of which I hope to see on this trip!

Lace from Woman’s Drawers made in 1880’s Ireland. Women started wearing undergarments that could be ‘drawn on’ in the 1800’s. These had separate legs that were stepped into and tied at the waist with a linen band. 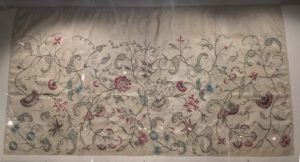 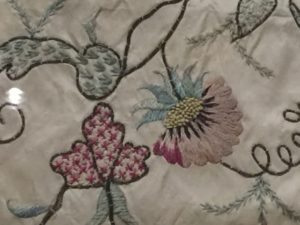 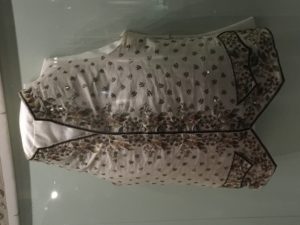 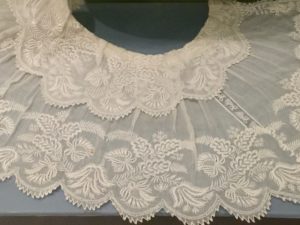 Lace collar worked by a girl in an embroidery class, County Down, Ireland, 1860’s.  In the 1840’s, thousands of girls as young as 5 years old worked for pitifully low wages to provide Glasgow merchants stock for London markets.  But the meager wages helped some families survive the famines. 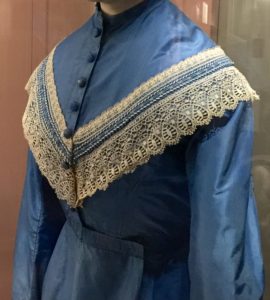 Day gown made in Ballymore Co, Sligo, Ireland about 1867.

This gorgeous blue color of the silk was created using ‘new’ synthetic abalone dyes.  The gown remains pristine… Maria Sweeney had the gown made for her brother’s wedding and then also wore it to Mass the Sunday following the wedding. The priest disapproved of the “figure-displaying style” (say, what???) and Maria never wore the gown again! 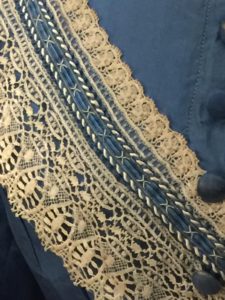