Last night I attended the preview party for the 2018 Quilt and Fiber Art Festival in Everett, WA.  With all the wonderful entries in this large International show, I’m awestruck and so humbly honored… I won 4 awards!

A Best of Show-Mixed Techniques Award Of Excellence for the show, “In Klimt’s Corral” 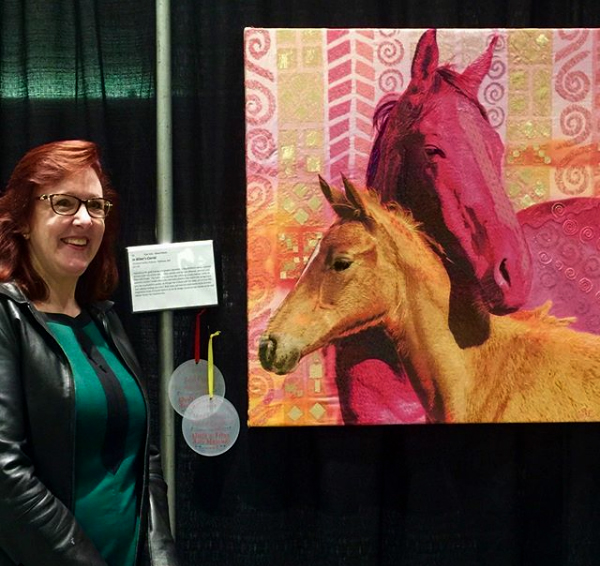 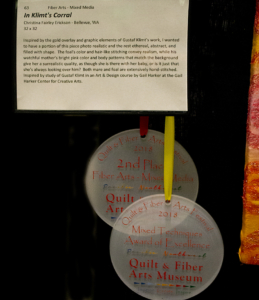 “In Klimt’s Corral” will be included in the “Award Winners: Quilt and Fiber Arts Festival 2018” exhibit at the Pacific Northwest Quilt & Fiber Art Museum from October 17 – November 18, 2018.

Meanwhile, I’ll be scooping up the Bullkelp Vessel and Crested Serpent Eagle pieces to include in my exhibition later this month at the La Conner Country Inn.  I’m still working feverishly to finish up all my pieces for that exhibit.  I haven’t even taken time to count them all up, but I think I have about 30 pieces.  I’ve continued to work many of my pieces to my theme of “the Water’s Edge”, coinciding with all the work I did on seaweeds during my 2 year Level 3 Art & Design class. 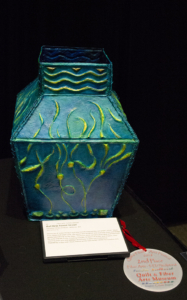 I want to thank my family for all the support they’ve given me as I continue on my fiber artist journey.  I was so happy have my Mom, husband Randy, and daughter-in-law Zeyneb with me at the preview party last night, and I look forward to our other kids coming to my Advanced Stitch Exhibition.  I have to give extra acknowledgement to Randy for putting up with my constant stitching or other work while we spend time together as well as having my art supplies stretching into all corners of our house!  I appreciate all the support from both family and friends. 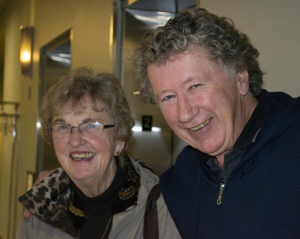 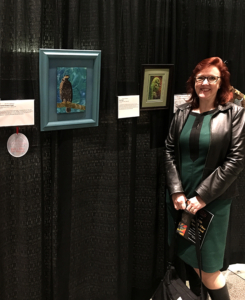 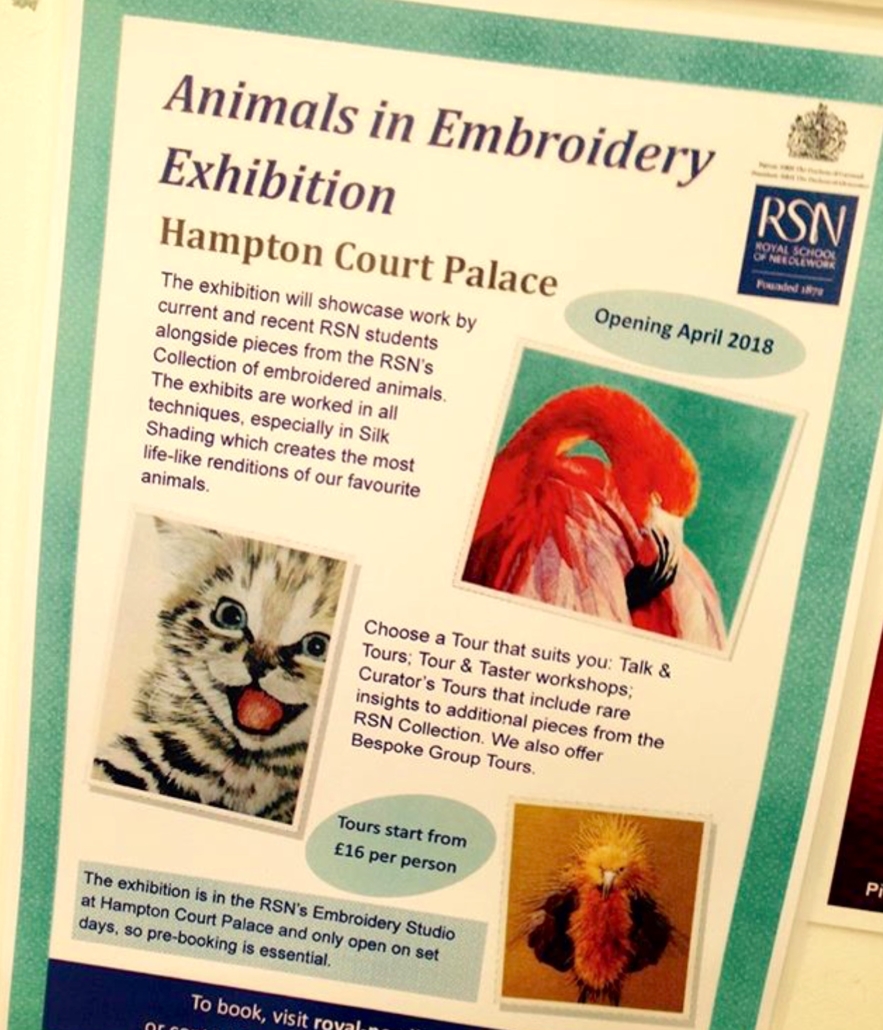 I’m a great admirer of England’s RSN and the incredible embroidery pieces produced by their students and tutors.  I’ve had the great fortune to visit them twice in the past, most recently in 2016 for theor Stumpwork and Raised Work exhibit.  So when planning my current tour, I looked up what is available and found their current exhibit is “Animals in Embroidery”- one of my favorite things to create!  Only problem was that the curator’s tour this month occured only at 11 am on the day I arrive from Seattle at 7 am!  I thought about it for several weeks and then decided I’d take the risk and sign up, even if timing was tight and I might miss it.  Luckily the stars must have been aligned because our flight arrived on time, we were successful with our train connections, and we met the RSN volunteers at the front ‘moat’ gate of Hampton Court Palace at 10:45 am. 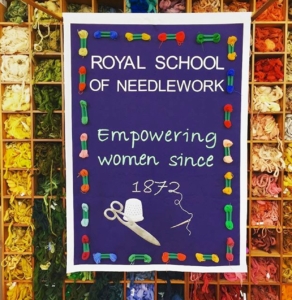 The Royal School of Needlework (RSN) started in the late 1800’s with Queen Victoria as their first patron.  Their mission has been to keep the art and techniques of hand embroidery alive and thriving, as well as helping train women (now men too) for employment so they can support themselves and not become destitute  They have classes at Hampton Court Palace and other International locations lasting from 1 day to several year programs.  They also have rotating exhibitions at their on site location, which can be viewed with a curator’s tour.  Book a tour at the Royal School of Needlework here!

According to our presenter who is inher second year of the RSN teacher certification program, animals  (including birds) are the second most common subject for embroidery (flowers are the most popular.) The display of both student and tutor work includes all sorts of techniques, tied together by the common theme of animals.  The techniques include blackwork, needlelace, goldwork, canvas, Jacobean crewel embroidery, whitework, applique, and silk shading.

One piece that caught my eye was a blackwork race horse and rider.  The stitches were so tiny- about 3 mm at the longest.  To create the shading/shadows, the density of stitch is increased, often by increasing the thread weight.  The jockey was done in blackwork techniques, but using colored threads to create contrast.  This exquisite piece was given to Her Majesty Queen Elizabeth II, on the occasion of her Diamond Jubilee in 2012. 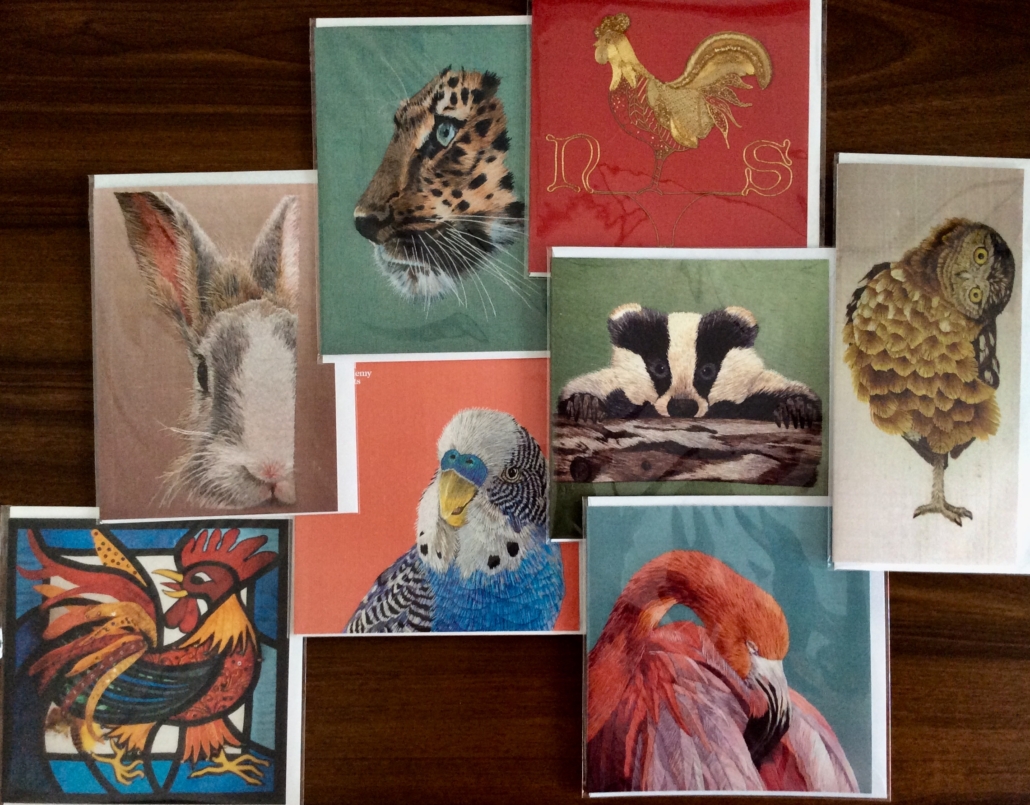 Cards purchased at the RSN gift shop display a few of the lovely pieces from the “Animals in Embroidery” exhibit.

Silk-shading works beautifully as a technique for animals and birds, as you can make extremely realistic hair/fur and feathers with gradually blending the colors of very fine silk threads.  There are many true to life creatures in the exhibit using this technique including rabbits, leopards, chickens, badgers, yaks, flamingos, bats, owls and more!  Some might call this a photo- realistic style, but I think it’s so much more than a simple 2D picture.  You can’t get the range of texture in photography that you can in stitch. 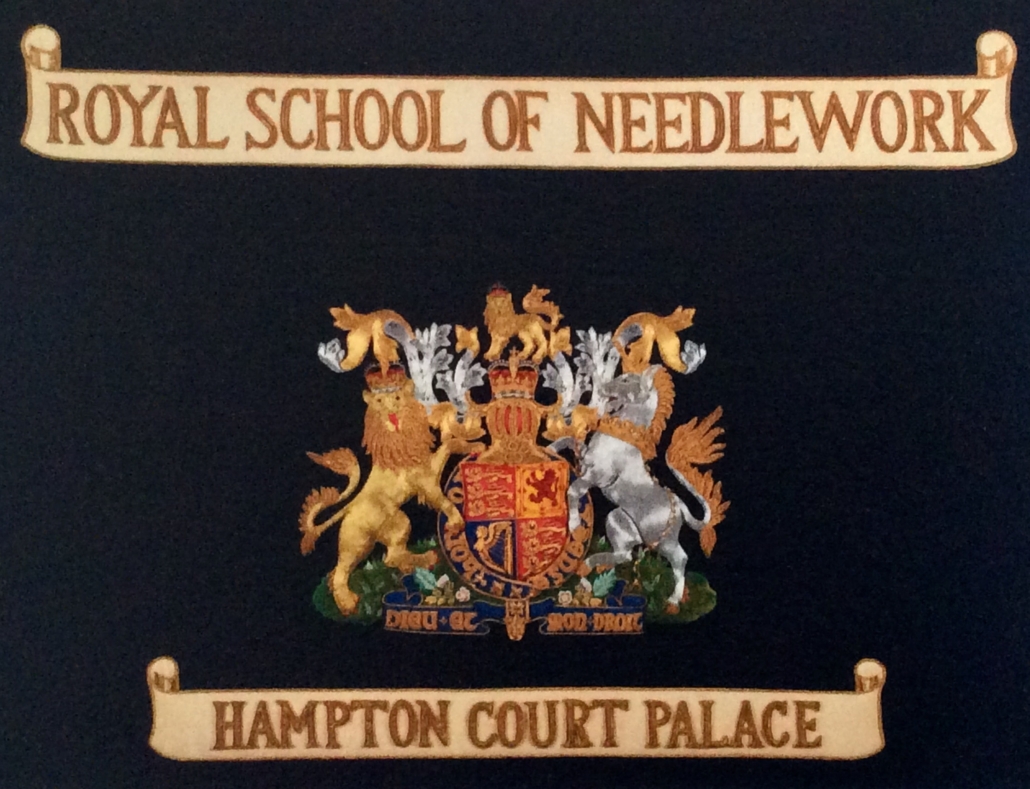 From the 60,000 piece collection owned by the RSN, this banner has exquisite goldwork with 10 animals included. Can you find them all?

The tour moved then to their workroom where RSN trained embroiderers are working on commission projects.  These include both conservation work (repairing historic embroidery to stop the ravages of time) and new bespoke pieces.

As a final treat, we got to the RSN giftshop, where I picked up a few goodies.  After flying 9 hours and staying awake through planes, trains and automobiles, we headed back to our hotel in London, to get a well-deserved rest before a late dinner.

If you’re planning a trip to London, make sure to look up the RSN and see if you can take a class or tour.  You’ll be glad you did! 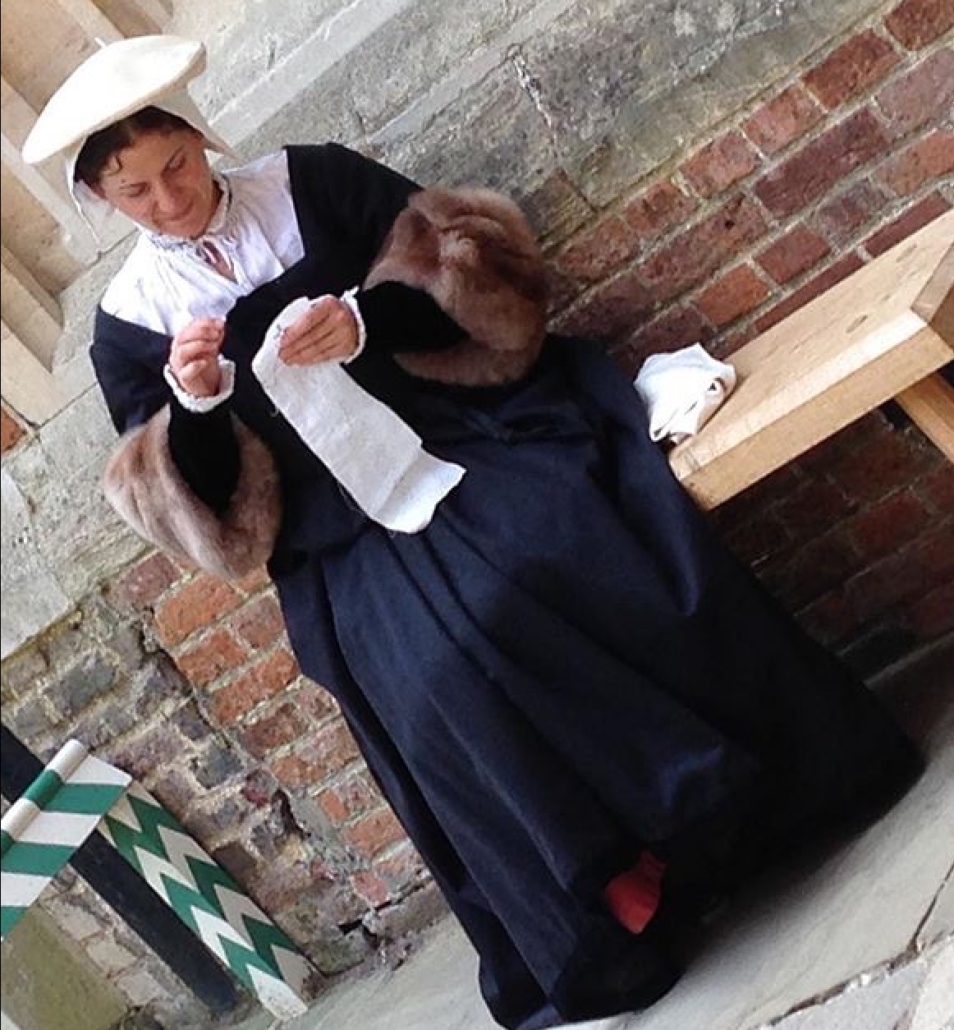 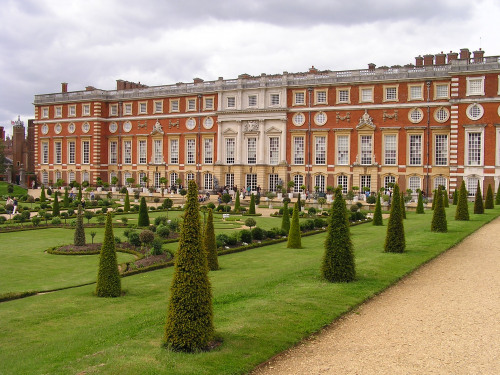 Looking at the back side of the palace (where the school is located). 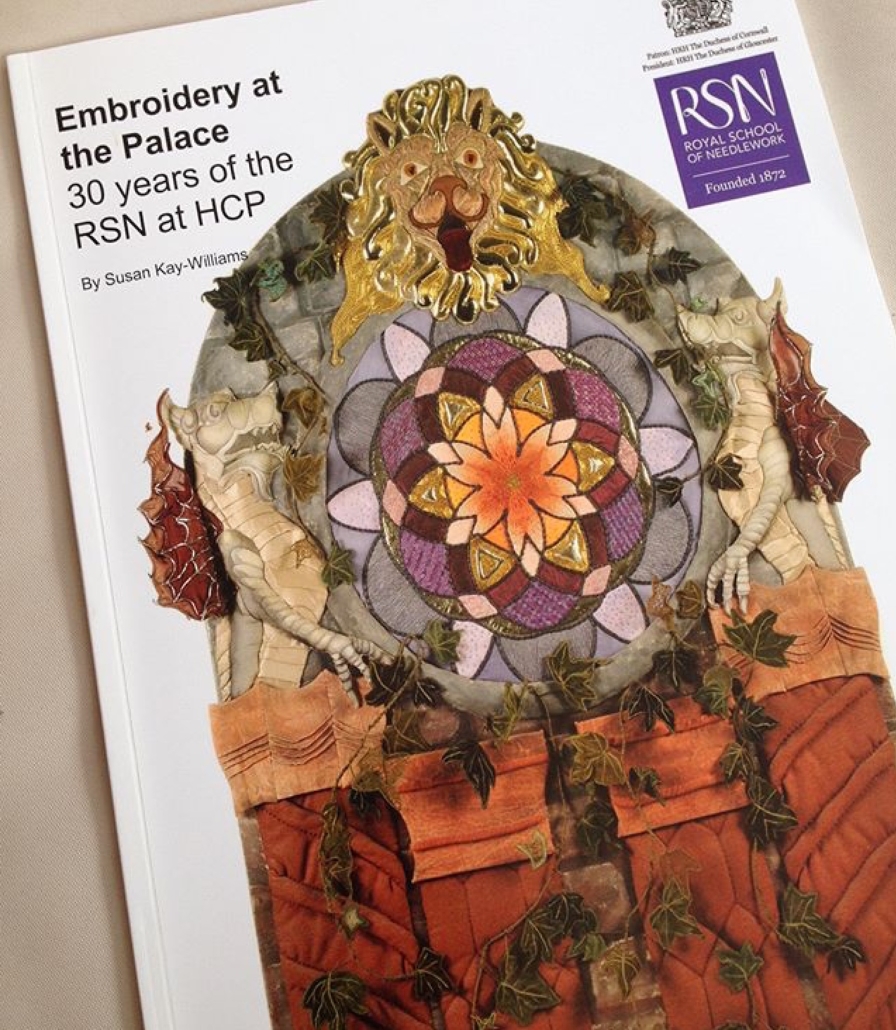 Magazine I purchased at the RSN store a out the history of the RSN since it moved to Hampton Court. 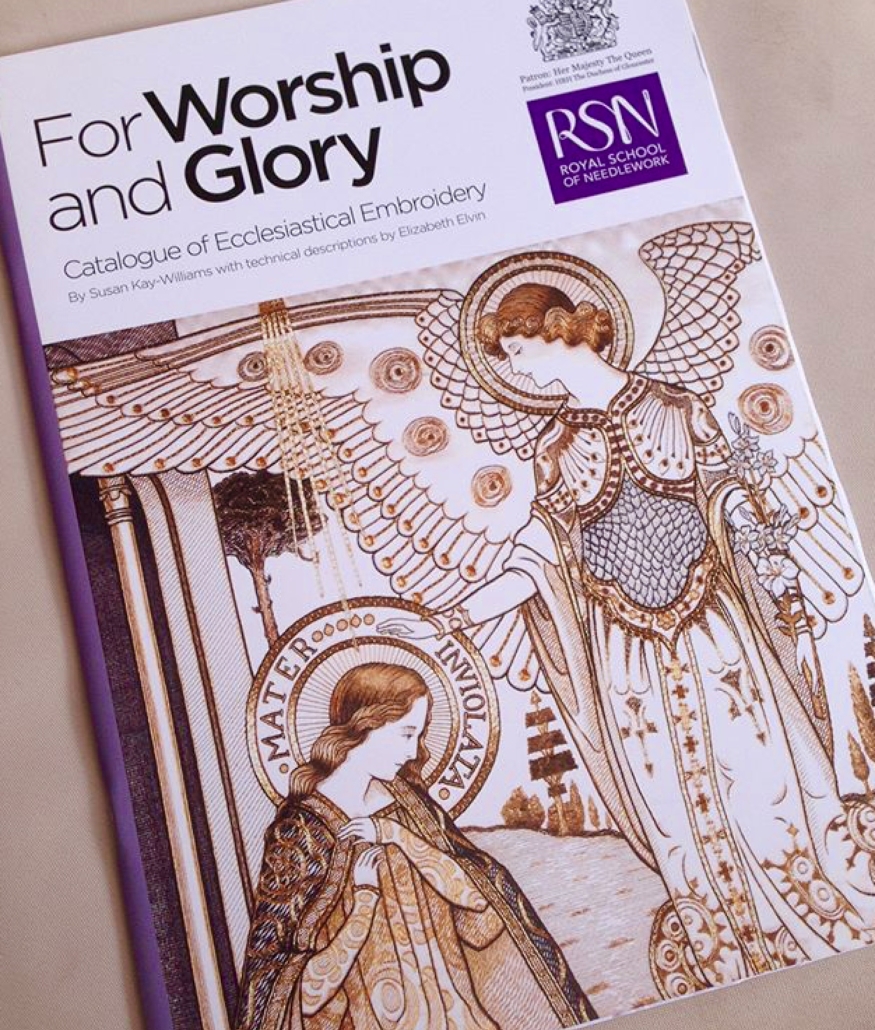 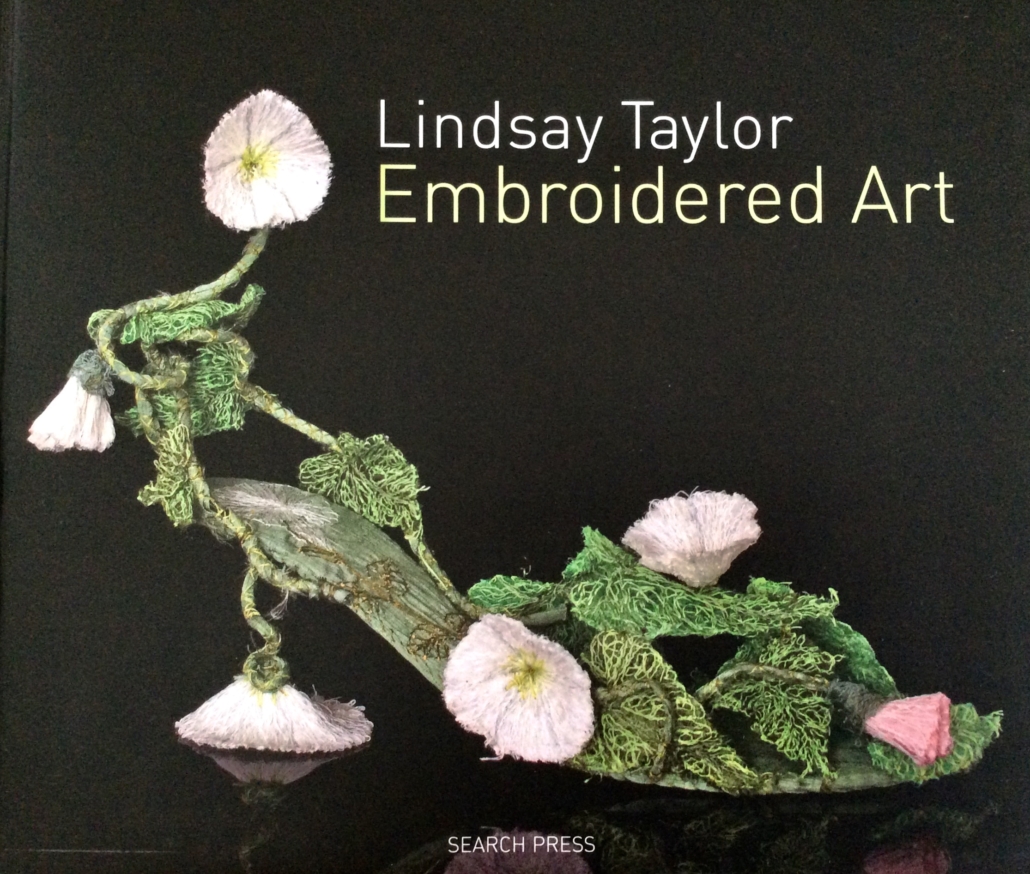 New book I found at the RSN store… looks fabulous! A sweet memory to take home and inspire my own projects.